We live in a world that tells us we must choose an identity, a career, a relationship, and commit.. to these situations.. as if we know what's gonna happen tomorrow, as if we aren't ever gonna change, as if we don't live in a world of constant flux... which we do. 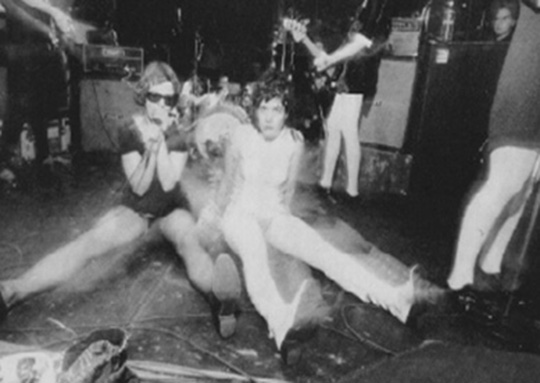 teilen
tweet
link
mail
0
25. März 1998
0
0
6 min.
Print
Correction
To force some forever identity on other people is stupid. Point out inconsistincies in their behavior, explain how they are not 'truly what they say' because you saw them 'do this' one time... why? Because it is easier to deal with cardboard cut outs than real people, cuz a lot of us pretend like we're the center of the universe sometimes everyone in just background extras in the movie we star in.

WELL WHILE WE ARE ALL ARGUING ABOUT WHOSE GONNA GET TO OPEN FOR THE MELVINS. WHOSE GONNA WEAR WHAT TO THE PARTY, WHO IS LAME/TAME BECAUSE TREY PERPETUATE THIS THING WE HATE, WHO IS NOT REALLY A PUNK ROCKER CUZ 'I remember when he/she used to listen to Duran Duran',THE REVOLUTION IS GOING DOWN ... no it's not happening without us, it is just plain not happening at all...

It is going down under the gurgling sounds of our own voices, reproducing the voices of our parents in a slightly altered way, the tv people... trying to dictate to each other what is and what isn't cool or revolutionary or true resistance, what is or isn't true in other peoples lives we sit around making all these boxes and labels, nothing to put in them, we are wasting valuable time. FUCK THAT SHIT, LET'S START TALKING FOR REAL.

Because i live in a world that hates women and i am one... Who is struggling desparately not to hate myself and my best girlfriends, my whole life is constantly felt by by me as a contradiction. In order for me to exist i must believe that two contradictory things can exist in the same space. This is not a choice i make, it just is.

JIGSAW, a puzzle made up of all different weird shaped pieces. It seems like it will never come together, it makes no sense, but it can and it does and it will. Jigsaw, pieces like where you grew up and in what kind of fucked up culture and do you have a penis or not and did your parents have money and did you get teased for wearing the same coat four winters in a row and are you Thai-american or Black or Mulatto?

And what do all these things mean when you are trying to resist, do something, have a good time??? I need the Jigsaw, fuzzy in my head as everything else, sometimes clear.

The fact that he grew up in a working class family has everything to do with how he is gonna express sexism, what kind of music he is gonna like, how i am gonna treat him.

Jigsaw girl, she got fucked by her father, 8 years, people say she's flakey and inconsistent, lays in her bed eating donuts, resisting going outside where the silence will engulf her, rather sit there eating than always be eaten up ... her experience has everything to do with how the pieces are fitting together (or not) for her, judge her from your place without wondering what's going on in that there Jigsaw mind of hers, and you have pushed her further away from clicking, her hand wants so bad to feel, one edge against another, together, one place next to another, locking into place... you have to be able to see the puzzle before you start putting it together.

Resistance is everywhere, it always has been and always will be. Just because someone is not resisting in the same way you are (being a vegan 'out' lesbian, a political organizer) does not mean they are not resisting. Being told you are a worthless piece of shit and not believing is a form of resistance. One girl calling another girl to warn her about a guy who date raped her, is another.

And while she may look like a big haired makeup girl who goes out with jocks, she is a soldier along with every other girl, and even though she may not be fighting in the same loud way that some of us can (and do) it in the fact that she is resisting that connects us, puts a piece together.

Jigsaw Youth, i don't know what this means anymore than anyone ... only what it means to me. Standing proud and saying "I don't know who i am, i wanna know more, i am not afraid to say things matter to me.

Assuming that people are either 'part of the problem or part of the solution' disincludes a lot of people, who, at this monent, do not feel (and, therefore ARE NOT) safe enough, emotionally, physicalley and/or financially to resist in the same ways you might be. By judging people according to your standards of resistance or whatever ... it makes it harder for people to recognize what they're doing an being important and political etc.... it makes it harder for them to get into safe enough situations where they can resist in more outward, community oriented ways if they want to.

Jigsaw Youth, the island of lost and broken toys, feminists who wear lipstick, people who envision 'the land of do as you please', whose lives are not simple and they are sick of trying to make themselves cohesive enough to fit into a box.

Knowing you will see the Puzzle put all together but trying anyway cuz each fucking piece really matters and being with friends matters. Jigsaw Youth... inventing and reinventing what these words mean.

a total of 1 contribution

- Jock Palfreeman’s Official Statement of Events. I went out from Rock bar at Lavele Street with Lindzi and Tony and with other people I don’t know by name.

- Consider the present situation. The Industrialized World wakes up to flnd itself in a quandary. Perhaps the technological confrontation between the two ideologies

- Even after the war in Ukraine, capitalism won’t be able to establish a stable post-war [...] mehr...