The shock and horror are unending. Fukushima is the 9/11 of the fossil-nuclear energy system. The horror of a world that knows only profit and capital condensed in a nightmarish way in this nuclear reactor and its invisible deadly radiation. The pictures and news from Japan are like a disaster film.

teilen
tweet
link
mail
0
18. Juni 2011
0
0
8 min.
Print
Correction
It was as though our ideas of the destructive energy indwelling capital had materialized. We can imagine destruction and mass suffering more than life in a world of sharing, carefulness and community. The world appears as we conceive and imagine it to the end of time because it appears that way.

A world of sharing, carefulness and community is obviously nonsense. Still this nonsense has a system.

Comparing the supposed achievements of capital with the incredible suffering that it has caused, is causing and will keep causing until it is overcome is tasteless but necessary. The technical possibilities released by the human spirit, exploited by ruthless capital against concrete needs and ecological limitations and brought into play to our harm cannot be ascribed to capital.

Inventors and inventiveness always operate where people team up. The completely senselessend-in-itself and ruthless machine of money-making for the sake of money-making can be ascribed to capital, subordinating everything in its way as soon as money becomes the dominant form of "riches" – a word hardly expressed in this world that models itself according to money. Money together with the market economy becomes the undisputed form of "riches," the seemingly inescapable way that people organize their life but is really the cause of enormous, unnecessary suffering and the obstacle to an alternative.

That is the reality of capital. Some must sell their labor power because otherwise they would have nothing from which they could live. Others buy their labor power because they own the means of production, the machines, factories, raw materials and the land. Buying and selling, money and market constitute its context. Market and capital are two aspects of a system. The market is the sphere in which capital rakes in its profit through honest sales and can appropriate the objects of its exploitation without revolts through harmless purchases: natural substances, human material, metals, energy, land and labor power.

The state guarantees that nothing changes in this: through so-called social benefits so wage-earners surrender to their fate and find everything all right, through the periodic deployment of the police and army when people rebel, through a growing control to nip unrest, resistance and alternatives in the bud when the state cannot bind them in its machine. The state is not only police, military, administration of justice and government but the whole conglomerate of unions, educational institutions, economic associations, newspapers, television stations, NGOs, parties and all the other organizations of the status quo whose function is to prevent the abolition of capitalism with fear and incentives.

A Tale of Woe

The devastation (named capital) is planted in these social conditions from the very start in the members.

Its elements are: the expulsion of farmers from their land in western Europe since the beginning of the modern age; in state-capitalist states of the so-called command socialism into a catch-up modernization that has cost millions of lives; their forcible resettlement and expropriation in former colonies after formal independence; the removal of whole harvests vital for millions for the consumption of the arising working class; the mass enslavement of Africans; the intensified subordination of women through the obliteration of their freedom possibilities, knowledge assets, and power positions taken by men; the ransacking of colonies, racist branding of their inhabitants and their state privatization for the needs of capital; the targeted destruction of the crafts in Europe and the colonies; the forcing of people into the army, workhouses, prisons, psychiatric wards, schools and planned cities and the wiping out of those who absolutely could or would not join, rebelled and began something different, a human society of sharing and community. 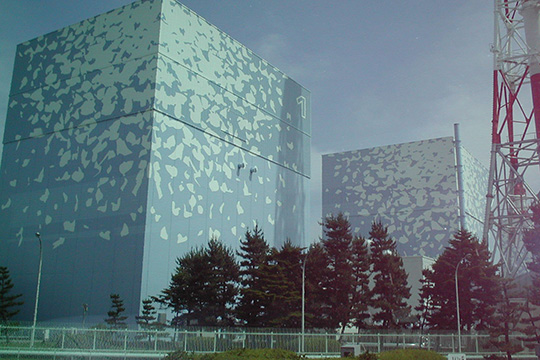 Bild: One of the photos taken at the Fukushima I Nuclear Power Plant tour sponsored by the Tokyo Electric Power Company on June 23, 1999. / Kawamoto Takuo (CC BY 2.0 cropped)

The devastation continues wherever capital settles: in its constant crises and phases of prosperity that only increases the force of the next crisis and opens up a deceptive prosperity of goods consumption to some wage-earners that should compensate for the lack in self-determination and pay them for their service to the capitalist system, in the impoverishment of those washed up by capital, in the slums, sweatshops and factories and in the wars and military campaigns of destruction waged by capital and its state.

One time this was calculated coolly as in the 1973 neoliberal coup against Allende in Chile and another time at the limit to madness as in Richard Nixon's madman-tactic toward the end of the Vietnam war or at the front lines of the First World War when masses of people ran into the no man's land of mines and grenades with the prospect of death and finally in the zone of sheer madness in Nazi Germany toward the end of the Second World War when the murder of Jews was subordinated to the rationality of warfare.

The global catastrophe that capital represents is not yet visible to the whole extent. Much of what most contemporaries impute to capital as "progress' and "blessing" has a deadly legacy whose true face will first appear in the coming years, decades and centuries: climate change, nuclear waste, poisons, genetically-changed organisms, purged landscapes, dead parts of the ocean and an infrastructure together with the production runs, human passions and institutions that depend on a life-threatening energy system.

This energy system must adjust anyway to pure resource shortage. Nuclear power is part of this system that can make life on earth into an inescapable hell – if we don't turn it off.

From Hiroshima to Fukushima

Japan relied on development of nuclear power because the land passed through a capitalist modernization and lacks sufficient possibilities of energy production on its territory. At the beginning of the Second World War, boycott by the US threatened Japan.

Japan feared above all being cut off from oil deliveries that were the foundation of the expanding system of capital, market and state at that time and responded with a brutal strategy of imperialist expansion. At the end after the unspeakable suffering of the world war, nuclear energy was used by the US for pure annihilation devoid of the abstruse logic of military necessity connected with the names Hiroshima and Nagasaki. This was a beginning of the development of a civilian nuclear industry that with great hesitation has been vigorously underway since the 1980s and provided Japanese capital and the lifestyle of wage-earners with more and more energy.

What began with Hiroshima did not inevitably end with Fukushima. While the suffering made intolerable because it was man-made catches one's eye and makes one speechless, Fukushima will only be a picture for a landscape of horror and devastation that capital prepares for us if we don't remove it. The Fukushima in northeast Honshu in Japan will be followed by a coal-Fukushima intensifying climate change even more which nevertheless is zealously praised by defenders of the system as a "clear alternative" to nuclear power.

This is already accompanied by the bio-fuel-Fukushima which robs a multitude of people of their life foundations in a global conquest and settlement that can hardly be imagined and holds ready "endless green energy" for the defenders of the system. A raw material-Fukushima looms on the horizon that could encourage the development of renewable energy systems which according to the opinion of many supporters should feed the immense energy-hunger of capital: exploitation of the earth to the last gram of metal, destruction of living conditions up to the last sanctuary and destruction of alternatives to complete mental emptiness. The catastrophe that capital represents becomes the media infinite loop. The public is horrified and nods apathetically.

Weaken all the fronts - Alternative “Transposition”: All Partisanship in the Clash of Cultures Should Be Refused (16.04.2007)Fukushima: Le vrai visage du capitalisme - D'Hiroshima à Fukushima (23.10.2011)A Contribution to the Critique of Unions - The Bounds of Proletarian Emancipation (19.12.2012)

- Why does capitalism fail to implement sustainable climate policies despite the escalating ecological crisis?

Creating communities of heartSharing one skin

- As a child of ten, I once sat on a hillside on the reservation with my father and his mother as they looked down into the town on the valley floor.

- The causes of the current crisis in the international financial markets, have been attributed by almost all commentators and economic experts to the uninhibited freedom granted to speculation, particularly in the USA.