Weaken all the fronts | Untergrund-Blättle

The 20th century was the bloodiest century in the history of humanity. The 21st century could break this record. The arsenals are full or can be full at any time. We live in times of insecurity of the worldwide political system. 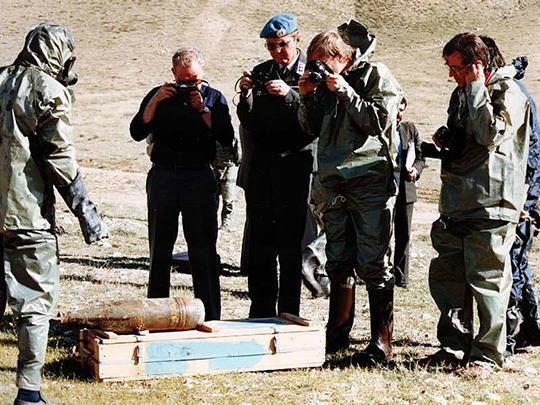 teilen
tweet
link
mail
0
16. April 2007
1
0
4 min.
Print
Correction
That is realistic though it may sound cynical. As everybody knows, growth in all areas is a principle of capital accumulation. A black scenario is unfolding today in the Middle East where suffering and brutality constantly increase.

That the West can do anything is not questioned any more. Whether it should do what it can do is discussed. Only the opportuneness of the moment for military interventions (with and without a UN mandate) is usually interesting. That this arrogance hardly attracts attention speaks volumes. The matter-of-factness with which the Occident acts out of human rights- and economic-superiority – literally subverts, intervenes and bombs – shows the overbearing nature of this policy. The error striking with Ahmadinedschad is not striking with local exponents. To Chirac, Teheran’s nuclear bomb direction is not a problem.

After Saddam Hussein, Mahmud Ahmadinedschad is now unmasked as a national socialist. Instead of thinking in a more complex way, the facts of the case are slandered as trivialization and appeasement, anti-Americanism and anti-Semitism. The parallels click into place and the tickets are issued. Real dangers are not discussed but rather the wildest threatening scenarios that are often nothing but hallucinated analogies outside all real power relations. Subjunctives are rated highly and easily defeat every indicative. What is reality against a projection? It could be and therefore!

Ahmadinedschad is one who consistently applies a conventional political logic. Ahmadinedschad claims for himself what was self-evident for others for centuries. Nuclear power and nuclear bombs as technologies are important parts of the capitalist system. No fears of cultural contact exist. Who is astonished that times are past when nuclear technology was regarded as un-Islamic? Caution is commanded regarding nervous headlines. One only needs to remember Saddam’s weapons of mass destruction. These weapons could have existed but did not exist. Lies were repeated with full conviction.

The propagandistic pattern recalled the Cold War. After 1945, the Third Reich and the “evil empire, ” the former Soviet Union, were equated by means of the insidious totalitarian formula. Nazi comparisons are again on the agenda. While Israel’s policy is compared with the Nazis in an incredible way, every Muslim is stylized as a Hitler.

An incredible lack of comprehension grows rampantly. This is manifest when one does not know who is a friend or an enemy. The de-historicized and exported Nazis serve as an alibi for diverse madnesses. To avert greater harm, this city has to be bombed, this land boycotted and this system blackmailed. So the argument goes. Reasons are found or invented if necessary. This regressive calculus is in a boom season. What can a prophylactic war against Iran accomplish other than an extensive fire? Is that the goal? Whoever accepts everything as a supposedly lesser evil will justify evil and monstrosities. Partisanship in the announced clash of cultures is practiced capitulation.

The alternative “transposition” means taking a standpoint beyond the planes of conflict amid the amplified dangers. This must not be confused with equidistance or ignorance and does not exclude concrete solidarity with victims. This solidarity is in effect for afflicted individuals, the ones who suffer in conflicts, not nations, collectives or states. Transposition does not mean either party or neutrality. It does not try to settle in the given coordinate system but emphasizes the destructiveness of confrontations. It is the ideal negation of conflict that leads to a real negation. It poses its questions and does not merely reply to questions. It rolls up banners and does not hoist flags. In short, weaken all the fronts! Come out of the trenches!

Whether transposition will prevail can certainly be doubted. If it does not succeed, the left faces an historical disaster. It will marginalize itself because it cannot set anything independent against the global barbarization. In the metropolises where we live, this means: no flank protection for the Occidental powers and no aiding and abetting war-mongerers. The debates finally move from a denunciatory to an argumentative plane. “This is wrong because” replaces “You are a… ”