The Road to Nowhere | Untergrund-Blättle

The US administration titles its current crusade "enduring justice". This crusade is no joke, satire or bad film. It is bitter seriousness, dead earnest. In the meantime, the first ground troops have apparently landed.

teilen
tweet
link
mail
0
27. November 2001
0
0
4 min.
Print
Correction
Like infinite justice, enduring freedom can only happen in death. What is enduring is only death, the final liberation from life. Enduring freedom is the code name for endless death. The necrophilia of a system is revealed in its sermons and slogans even its exponents do not understand their own horizon. Their own horizon was never an object of their reflection. What shines is ignorance. The White House thinks of its freedom as the happy hunting grounds, as endless and eternal, freedom – here, there and everywhere.

If the philosopher Ludwig Feuerbach, author of "The Essence of Christianity", would hear of the new American war terminology, he would turn around in his grave. "Whoever is afraid of being finite is afraid of existing." The crusaders now want to bring this deal non-existence to the enemies. Angels of death are not merely their fanatical adversaries. They are themselves and have always been angels of death.

"Culture is to die for!" is not a motto of Osama Bin Laden although it would entirely fit him but comes from Samuel P. Huntington. Nearly all the media are reeling off this Western like an ideological saturation or carpet bombing. Our vision does not have to be distinguished from television. The campaign of death and the advertised campaign of freedom are one. One would be inconceivable without the other. Thinking is generally not possible in times of global madness that knows its free enterprise rationalities. The subjects produced by the culture industry are greedy, not inquisitive. They do not even want to know what they wage war against. The main thing is revenge!

This capital freedom is now perpetuated through a campaign that primarily equates death with freedom. Death already existed when the operation was approaching. The humanitarian catastrophe in Afghanistan already began before the military operation. The ensemble of fear and hunger, flight, poverty and sickness brought catastrophe. Days of silence will be devoted to such trivialities, not only minutes of silence for the victims. There is no simple comfort for that catastrophe.. The words hopelessness and wretchedness reveal its whole dimension.

If children and fools speak the truth, then Bush jr. and his warriors of God are included. They are truly the Ajatullahs of freedom. The ultimative ranting and raving demonstrates the character of his personnel. The religious mania in Talisbanistan and in Amerikanistan has a very similar structure. Both are extremist modern, not medieval. A dark future threatens, not a depressing past. 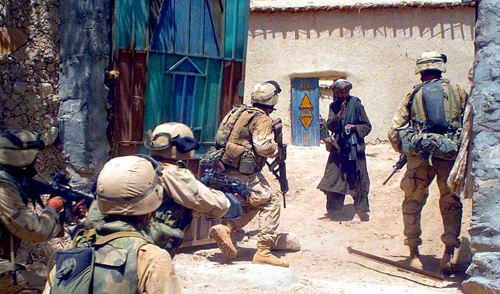 To endure means "holding out", "surviving", "bearing" and "tolerating". The western power shows this with others. The alarmed empire immunizes itself with strong words… "That one sees the retribution in me" (Dante) could be the command of the hour. Still the autistic gossip of freedom does not provoke liberated laughter but produces understanding and consent, sometimes even frenetic applause. Many tons of stubbornness without a gram of perception is lodged in this persistence. The terrain of folly is endless. Its expansion, it seems, is the mother of all duties in the Orient and the Occident.

The punitive action could be described this way. First of all machine guns drone, grenades detonate, bombs explode and troops slaughter. The Talking Heads can be heard from behind the fighting. "Well we know where we're going/ But we don't know where we've been/ And we know what we're knowing/ But we can't say what we've seen", the stanza exclaims. "We're on the road to nowhere/ come on inside" is the refrain.

Bush and Bin Laden together want to force a barbarization program on the planet. A collusion, a common agreement even if against their will, underlies their collision. The challenge to all emancipatory forces must be to energetically thwart this scenario of horror without anti-Islamism and anti-Americanism. The resistance should be free from cultural resentment. Amid more than enough errors, one should not be led astray. The left may not be an accompanying orchestra or a panic orchestra.

neOanderthal is a musical, sound and social experiment. It’s a live concert, without loops and based on an self-made instrument kit, whose materials are strictly recovered, recycled and played manually with different techniques.