Whitechapel in the 1930's was a melting pot of races and cultures, in the last quarter of the 18th century there was an influx of immigrants from Eastern Europe, Jewish immigrants from Poland, Rumania and Russia fled to England to escape their appalling economic conditions as well as virulent anti-semitism and pogroms that they suffered.

The mural on Cable Street in London, dedicated to the Battle of Cable Street. Foto: Amanda Slater (CC BY-SA 2.0 cropped)

teilen
tweet
link
mail
0
18. September 2010
1
0
8 min.
Print
Correction
They added to already established Jewish Communities who had settled in Britain over the last century from Italy, Spain, Holland and Germany. (facing up to anti-semitism - D Rosenberg JCARP publications 1985). The Jewish community expanded over the years until it reached around 330,000 nationally in 1930's.

The London Jewish population was around 183.000 of which 60% lived in the east end of London with 52% of those living in the borough of Stepney. They established themselves in Stepney, Whitechapel and Hackney, with them came their religion and culture. Many were tradespeople working in Cabinet making, the fur trade and tailoring. The East End in1930's was an area of great economic hardship and social deprivation. Housing was a major problem the whole area was overcrowded with families living in slum conditions, unemployment was rife.

Historically the Jewish community a had "Liberal " political perspective, it tended to listen to its community leaders whose attitude was very much of "don't rock the boat ". With the influx of new immigrants and the influence of the new second generation of "East End Jews ", perspectives began to change, social and cultural groups such as the workers circle began to take on a more overt political stance which was often contrary to the established community leadership of the Board of Deputies of British Jews.

There was a protracted debate within the Jewish establishment on how to "defend " the community from anti-semitism, many radical and left leaning Jews were dissatisfied at this dithering and became drawn towards the more militant organisations such as the Communist Party and The Jewish Peoples Council Against Fascism and Anti-Semitism (JPC) which was set up in the 1930's to combat the fascists on all levels. As anti-semitism increased in line with the deteriorating social conditions in East London, Fascism was rearing its head across Europe. In the early years of the 1930's the Jewish community in the East End was victim to individual acts of terror perpetrated by the new and growing British union of Fascists, lead by Oswald Mosely.

The Jewish establishment as stated by the Jewish Chronicle regarded these early acts of verbal and physical abuse as being perpetrated by "Ill informed and Ill balanced individuals " and had " no desire to exaggerate the importance of the incidents ". The following years saw these individual acts of terror become a sustained campaign of hate, violence and intimidation. It was time for the Jewish community along with it's allies to take the fight to the fascists and anti-semites.

The British Union of Fascists (BUF)

Prior to the formation of the BUF in1932 by Oswald Mosely, there was a number of anti-immigration, fledgling fascist and anti-semitic organisations in existence, these included "The Britons " set up by Henry Hamilton Beamish in 1919, and the British Brothers league established in 1902 and lead by Major W Evans-Gordon the one time Tory MP for Stepney.

After the 1917 October revolution in Russia, many right wing politicians tried to equate the rise of Communism and the Communist Party with the Jews and attempted to discredit both. This attitude gave ammunition to form other fascist and anti-semitic groups, including Arnold Leese's Imperial Fascist League, the British Empire Union among others. Oswald Mosely had a chequered political past prior to his leadership of the BUF, he had been both a Tory and Labour member of Parliament and was tipped to be a future Prime minister, considered by many to be an outstanding Orator, this Charismatic and wealthy individual became disillusioned with the established political parties and formed the New Party in 1931.

After the New Party failed to get any of its 25 candidates elected into Parliament, Mosely studied Mussolini's fascists and formed the BUF based on them adopting the Italian Fascists structures and uniform. The BUF Blackshirts were born. Originally denying charges of anti-semitism, the BUF soon organised against the Jewish community, seeing them as the cause of all the problems which faced the people of the East End and of being part of a world wide conspiracy of world domination as purported by the notorious forgery "The protocols of the Elders of Zion ". Initially the BUF gained support both from the working class and from members of the establishment such as the press baron Lord Rothermere who was attracted to the Italian style of fascism Mosely wished to imitate.

By the early part of 1934 membership of the BUF had risen to around 40000?, however after some major disturbances at Olympia and Hyde Park membership began to fall, and supporters like Lord Rothermere could no longer condone the increasing anti-semitism shown by Mosely and his Blackshirt thugs. At this time Mosely began to be influenced by the rise of Hitler and the NSDAP, and some members of the BUF were also associated with other pro Hitler and appeasement groupings in England.

The BUF did not establish itself in the East End until comparatively late the Bethnal Green Branch was established towards the end of 1934 along with the Shoreditch branch, the borough of Stepney did not have a branch until one was established in Limehouse in July 1936 (The Fascists in Britain - Colin Cross 1961). Two blackshirts, Owen Burke and E.G. "Mick " Clarke organised the early BUF campaign of street meetings, rallies and intimidation against the "Jews and Jewish backed Communists ".

As Mosely stated himself it was the intention of British Fascism " to challenge and break for ever the power of the Jews in Britain ". By the spring of 1936 it was clear that Mosely had targeted the East End to be the focal point of BUF activity and from there it was hoped that they could increase their influence throughout the country. The Cable Street parade was aimed at being a show of power and strength of the BUF.

The Communist Party and the anti-fascist movement

The role of the Communist Partyand particularly that of the Stepney branch in combating the rise of Mosely in the East End cannot be underestimated.

The Communist Party had been active among the local communities, campaigning for better housing, jobs and against exploitative landlords for some time. As a consequence of this it had come into contact with the harassed Jewish community, many of whom saw the Communist Party as the only political force actively fighting for their interests and the interests of the community as a whole.

Many Jews in Stepney joined the party and they were to play a vital role in influencing the parties line against the fascists. The Communisy Party had often been criticised by the main stream Labour and Trade union movement for its policy of attempting to physically disrupt fascist rallies and meetings, on 9th September 1934 the BUF planned to hold a rally in Hyde Park, the Communist Party worked hard to gain support to stop the rally, Walter Citrine and Wally Henderson signed a statement on behalf of official labour and trade union organisations urging workers to stay away and have nothing to do with the Mosely rally in Hyde Park.

This attitude just spurred the Communist Party into a greater effort to stop the fascists.

The Daily Worker published an article which stated that "the London trades Council officials funk fight against Mosely ". Leading communist Harry Pollit went on to write "Make September 9th a landmark in the fight against fascism ". The Communist Party distributed over 1,000,000 leaflets during the campaign, and held meetings all over London to organise the opposition on the day. 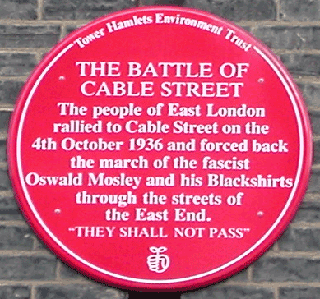 The fascist rally turned into a fiasco 150,000 people rallied to oppose the Blackshirts, the fascists entered the park in the early evening, none of their speakers could be heard, after an hour they gave up and behind a cordon of police left the area.

The next issue of The Daily Worker summed up the feeling of the anti-fascists in it's headlines urging people to "Drown the blackshirts in a sea of working class activity! ". The tone was set for the forthcoming battles in the East End. The Communist Party held regular street meetings in Whitechapel and Stepney, areas in the East End were rapidly being identified as either fascist or anti-fascist, often leading to disturbances between the opposing forces.

The Communist Party influenced anti-fascist feeling in a wide number of groups who joined the struggle against Mosely, leading Jewish Comrades held positions within local Trade unions, the workers circle and the JPC, The Communist Party at this time had a national Jewish Committee, many of whom were very close to their community, they produced articles and leaflets in Yiddish, which helped to enforce the belief within the Jewish community that the Communist Party was the only party that was actively fighting fascism and anti-semitism.

The Communist Party had its own charismatic leaders within the London district, such as Phil Piratin, secretary of the Stepney branch who was later to be elected as a communist councillor in 1937 and Member of Parliment for Mile End from 1945-1950, and Pat Devine the London district anti-fascist organiser. The battle of Cable street has become a symbol for the anti-fascist movement, it was a day when, the forces of democracy spurred on by organised and committed anti-fascists and individuals showed Mosely and his blackshirts that their brand of hate was not wanted.

Sixty years on the many those who took part in that battle are now dead, they will never be forgotten. Those who are still with us are a living testament to what can be done to overcome fascism within a community, it is their recollections which follow.

- In the years 2005-2007 in Poland there was a period of governmental coalition between 3 parties: conservative Law and Justice (PIS), social-conservative-agrarian Self-Defense (Samoobrona) and ultra-catholic League of Polish Families (Liga Polskich Rodzin

How fascist is the government of turkey? 2nd Part of the Interview with Burak Agarmis

14.04.2022 - We continued our interview with Burak Agarmis. He is a turkish communist and political prisoner in Maladrino prison in Fokida/ Greece.

Graffiti Galerie
Throw Up International I