To many readers of Profane Existance it must seem like the only strategy the PE collective has is to sell our records and to glorify viloence against the state, and hell, it’s partly true. 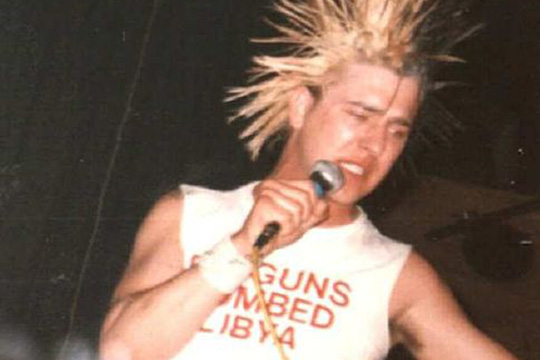 teilen
tweet
pocket
mail
0
18. Juni 2004
0
0
10 min.
Correction
Print
These activities are important party of our diabolical attempt to overthrow all systems of oppression and replace them with a world of free punk gigs, unlimited supplies of homebrew and, er, oh yeah, nonhierarchical and voluntary forms of political and economic organization.

However, there’s also a bit more to the reams of newsprint with the smudgy int, the thousands od records bought and sold, and, the endless trips to the post office. The output of Profane Existance (the magazine, the records, the shirts, the distribution etc) and the way P.E. itself is organized (as an anarchist collective) reflect two key parts of an anarchist strategy we fell is necessary to create a free, equal, and just world.

Most people have a somewhat legitimate gripa when they say, "Anarchy’s a great idea but it will never work." Anarchy won’t work now because people still need to build the political and historical conditions that make an anarchist society possible.

Despite our dreams, we won’t believe an anarchist revolution will happen overnight. Call us cynical. The Spanish Revolution didn’t just pop out the sky and into the Spanish workers and peassants’ hands; they built the revolution for over sixty years. Key to their struggle was the formation of collectives.

We see the formation of revolutionary collectives as one of the best ways to create the necessary bridges between the totalitarian society we live in today nd the free society we are working to build tomorrow.

There are two reasons why collectives can help build the necessary historical and political conditions that make anarchsit revolutions possible. First, collectivess are small, efficient means of organizing that provide practical examples of counterinstitutions that are egalitarian, voluntary and anti-authoritarian. Collectives work and they prove that anarchy works, and that’s one of the best weapons we have against bothcapitalism and the Marist-Lenoid version of revolution.

Collectives demonstrate that people can organise their lives together in democratic ways that do not opress or exploit anyone and that encourage the full and free participation of people in things that affect their everyday lives.

However we don’t want to advocate just any kind of collective. China and the Soviet Union had collectives but they were either created or taken over by the state. In the Soviet Union, people were forced to collectivize and if they didn‘t, Stalin starved them.

That’s absolutly not the kind of collectivization we’re about. We’re about anarchist collectives - collectives that are voluntary, nonhierarchical, egalitarian, directly democratic, encourage the full participation of all collective members, and engage in acts of mutual aid with other revolutionary collectives. We are not vanguardist. We fully believe the punk ethic of Do-It-Youself is a revolutionary ethic. If yo ant a free society, you have to DIY.

You have to form your own collective; don‘t join ours. You have to work with other collectives while maintaining your autonomy instead of being recruited into a party. Mass struggle must build from the ground up in a nonhierarchical, democratic manner. Collectives are an excellent way to build this kind of revolutionary anarchist struggle.

If we all just work alone, we are isolated and weak. If we all just join together under the banners of ’unity’ and ’mass struggle’ we lose our individuality and become just another head to count. However, if we work together as thight-knit autonomous collectives that form networks, federations, and coallitions with other collectives, communities, individuals, networks, and federations, we are powerful on a mass level while still retaining our identity.

Working with other collectives is important not only for building connections that strengthen the anarchist movement.

It’s also important because it helps break down the internal patterns of racism, sexism, classism, homophobia and other hidden hierarchies that can develop within a collective without members even realizing it. Working with other collectives and/or people of differnt backgrounds challenges us and the way we live and organize within our collective as well as outside of it.

When you get together and work with other collectives, federations, etc., all parties involved walk away changed. Coalitions aren’t just the sum of the number of groups involved, they alter the interests of the groups themselves because the communication involved forces people out of the protective shell a collective can develop if it doesn’t talk with other collectives. When something is so subtile within our collective that no one recongnizes it, getting a perspective from the outside helps a lot.

Forming anarchist collectives are vital to revolutionary strtegy because we don’t want another China, another Russia, another Cuba, another Vietnam. We don’t want a revolution in which everything seems possible (and is!) in the beginning yet within just a few years life returns to the same oppressive drudgery as it was before, only this time with a new boss. (Usually with a red star on his cap - and it’s always a ’his’).

We don’t want any party guiding our revolution for us and we don’t want to guide anyone else’s revolution. If you want a free society, you gotta do-it-yourself. DIY is where punk and anarchist politics cross, but it‘s also how any revolution worth participating in has to happen. From our exierence, the best way to create revolution DIY-style is for people to create collectives.

Obviously, another key to anarchist strategy for Profane Existance is propaganda. Propaganda helps spread our ideas to people who might not even considered before. For example, one important part of the magazone is to challenge dogmatic belief that serve to strengthen the present power structure, beliefs such as "fascists deserve free speech and freedom to assemble, too" and "some cops are good, some cops are bad" and other such liberal nonsense.

We don’t expect our articles, essays, and rants to change anyone’s mind overnight, but we do want people to know that theses ideas aren‘t god-given or "natural" and that there is a struggle going on about beliefs like these that most people tale for granted. "Not everyone buys into the ruling class ideology; we just though you should know", we say.

Futher propaganda also helps the collective because the citicisms we recieve from stuff that we publish or distribute challenges us ti defend our views and change them where necessary. PE has become a stronger to the feminist and anti-racist critiques that revealed the straight white male attitude that often prevailed (and still creeps in, despite our best efforts) the magazine. Propaganda inevitably breeds criticism: the collective uses that criticism to grow and change.

A lot of people critize the magazine because they say we romanticize violence and that we exaggerate the struggles we cover.

They are right; we do romanticize violence against the state and the ruling class and we do sometimes exaggerate peoples’ struggles against injustice however, we also have a reason for this.

Romanticizing this sort of stuff shows people - especially people who live in places that are generally isolated from revolutionary activiy - that people are struggling against unjust forms of power all over the world, and that sometimes these people win.

An anarchist movement needs that. We need to know that victories against hierarchy are possible and that they do happen, even if they don’t lead us straight into a revolutionary situation.

Romanticization also challenges in the media’s claim to ’objective truth’ in reporting. We believe that the idea of ’objective truth’ is bullshit. History happens, but the belief that you can describe or interpret history exactly as it happend is a lie. Those who are in power are also those who usually get to define what is ’true’.

By romanticizing events we not only offer an alternative interpretation to the ’truth’, we also challenge the ruling class and the mass media’s claim to a monopoly on truth. We say our interpretation of politics and history is as good as theirs and that if you’re going to believe one pack of lies you might as well believe ours!

Lastly, like collectives, propaganda shows that anarchy can be a part of everydays life. It‘s not just a theory, it is a multifaceted, thriving, practical, and just way of living your life. Propaganda documents our culture of resistance and ligitimates it. Counterinstitutions like collectives exist within countercultures like punk, anarchsi, feminist, queer, etc. We can’t expect the mainstream media to cover these countercultures, nor do we want them to do.

Again we gotta do-it-ouselves. By documenting our culture of resistance and adding a bit of spice to it here and there, our propaganda hopefully inspires people within and without the revolutionary anarchist movement to get active and tale control of their own lives and to realize that we can fight the staus quo and win.

At PE we havehigh hopes for people and this world, but we also try to be realistic. We don‘t expect everyone in the world to join a collective. Some people have just to work by themselves, and that’s fine. More important in terms of anarchist strategy, though, some people will activly oppose the formation of collectives and our atemmps to build a free society, this is why we see the revolutionary anarchist process as a process of struggle.

For us, an anarchist society will develop out of a long and perhaps bitter struggle between those who would maintain the staus quo (the ruling class, the state, cops, racists, upper and some middle class people, etc.) and those who want to overthrow it.

This is why anarchy is about revolution to us, not about ’evolutioin’. ’Evolution toward anarchy’ is a crock of liberal shit. If anything, humnity has devolved from a prehistoric state of relative freedom and autonomy to one of serfdom and slavery. Making the word anarchist by evolution is about as likly as humans developing a tail, and it would propably take about as much time to ’evolve’ even if it was. To change the world you have to act on it. You have to DIY, and that means revolution.

Viewing anarchy as a struggle involves keping collectives alive and thriving, keeping revolutionasry ideas alive and thriving, and not loving everyone: Some people are responsible for the way this world is run today and they need to be held accountable as much as any abstract ’(Fuck the) System’ should. At PE, our anarchist strategy is organize and propagandize against the powerful and for the creation of a new world bulit from the bottom up by the powerless.

This requires collective forms of organizations, intense propaganda campaigns, a commitment to direct democracy and against hierarchy, and a revolutionary demand to strip the power from the ruling class, by force, if necessary.

It also requires that we have a lot of fun and laughs (and beers). We wouldn’t have it any other way.

- Consider the present situation. The Industrialized World wakes up to flnd itself in a quandary. Perhaps the technological confrontation between the two ideologies

(A-Radio) Rider's wildcat strike at Gorillas in Berlin - ’This is just the beginning...’